On Sunday August 17th  I woke early, first thing I did was to rush to the window to see what the weather was doing.

Well it could have been worse.

The weather forecast became a must see every hour, no idea why as I couldn’t control the weather, we would just have to move to plan B, if only I had one!

As I went into the garden to look at the sky once again, I met my neighbour doing exactly the same thing.

My neighbour whom I have known all her life had generously said that we could use her garden as well, we have a fence that is hinged so we just needed to open it to allow lots of room for our guests.

There had been a great deal of baking in the previous few days enough scones for  40 people and cakes to sell. 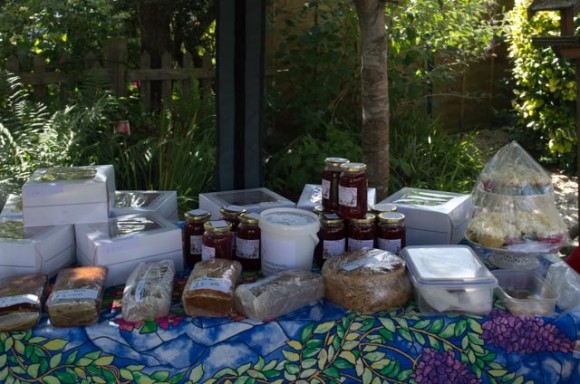 Everytime I past my neighbours door I could smell cakes, I think she needs to go into the bakery business.

After much scratching of heads and discussion a decision was made ok, outside it is then.

Chairs were brought out, gazebo was erected, tables put up.

As we seemed to still be at the end of Hurricane Bertha a variety of ingenious ways of keeping tablecloths where they were supposed to be, had to be used.

At around 10:30am the heavens opened and it rained stair rods.

“Oh dear,” we said, well it was a bit stronger than that actually but I might offend someone if I wrote the words actually used.

Bin bags, tarpaulin and general plastic was thrown over everything and we waited and waited.

Eventually, out popped the sun and blue sky could be seen, it looked as though we were going to be lucky.

At 2pm people began to arrive, the prep team started plating up scones, cream and jam and making copious cups of tea.

Happy chatter was well under way as we all enjoyed the gardens and the sun and good company. 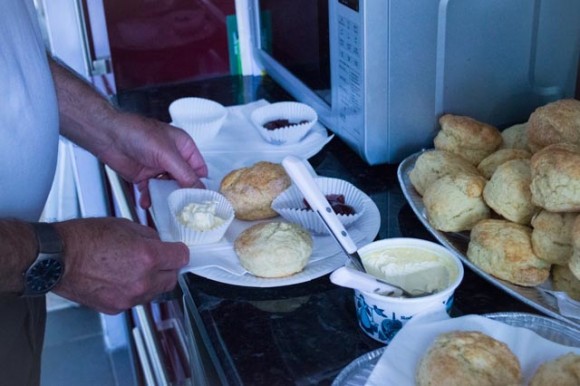 There was even a table selling Pimms!

Many people arrived with cakes for the cake sale, so many that we needed two tables to hold them all.

One of our grandparents did a sterling job in selling raffle tickets, for two hours she made sure that everyone had bought not just one but many.

It was a quintessential English scene all that was missing was the sound of leather on willow! Maybe next time.

We had all age groups from 2 to 80 plus and all in between.

When cream teas had been consumed it was time to do the raffle, it is so funny how excited people are over a raffle, mind you there were so pretty good prizes. A slow cooker, a hamper, £25 voucher for John Lewis, tickets for the Aquarium, voucher for Wagamamas, bottle of champagne, box of Dove products, Sanctuary products , chocs and small bottle of champagne.

It seemed the appropriate moment to thank everyone, silence fell as the first ticket was drawn, lots of delighted people buzzing in to choose their prize.

Finally people started to head off, well fed and lubricated.

Messages came in saying how much the afternoon had been enjoyed.

At the time of writing this post the amount raised is £580 and rising.

I would like to thank everyone, those who baked, helped set up and down, generally supported and all of you who donated.

I have to admit at being totally overwhelmed by your kindness and generosity.

I hope the cream tea will become an annual event, don’t say anything to my neighbour she might move!

We look forward now to the next big event which will be our music concert on Sunday November 30th.